, /PRNewswire/ --  (NYSE: WST) today announced its financial results for the second-quarter 2017 and updated financial guidance for the full-year 2017. 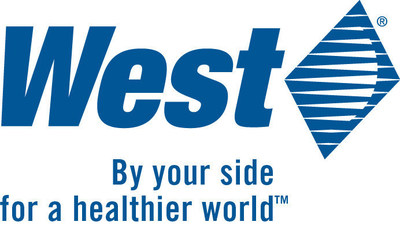 "Adjusted-diluted EPS" and "net sales at constant currency" are Non-GAAP measurements.  See discussion under the heading "Non-GAAP Financial Measures" in this release.

"Following a strong start to the year, we generated approximately 4% organic sales growth in the second-quarter," said , President and Chief Executive Officer.  "However, due to an unfavorable sales mix in the quarter, our margins did not meet our expectations."

"Strong Contract-Manufactured Products sales growth and solid performance of the Pharma market unit did not offset the softness in the Generics market unit and, to a lesser extent, Biologics market unit, which were impacted by customer inventory management and delays in several new drug launches.  In addition, our Generics unit experienced lower volumes from select customers that have had their production impacted by regulatory issues."

concluded, "We believe that we are taking the appropriate actions to bring our full-year 2017 results in-line with our updated guidance.  We see no fundamental change in the markets we serve.  We have confidence in our strategy and our long-term view of West's ability to grow organic sales 6% to 8% per year with expanding margins for the next several years.  West has participated on 100% of the newly-approved biologic drugs in the U.S. this year, and we are encouraged by indications that a number of large customers are resuming their typical order patterns.  We continue to invest in our business to fuel our long-term growth potential and are managing our costs.  Based on market dynamics and customer order patterns, we expect sales performance to continue to build over the balance of the year, with normal seasonality trends for the third and fourth quarters."

The Company is revising its full-year 2017 constant-currency (organic) sales growth guidance to approximately 6%, compared to a prior guidance range of 7% to 9%.

The principal currency assumption used in preparing these estimates is the translation of the euro at for the remainder of 2017, compared to a prior assumption of per euro.

Excluding the impact from tax benefits associated with the previously-discussed adoption of FASB-issued guidance, the Company expects that its annual effective tax rate will be approximately 30.7%.  The Company does not plan on forecasting future benefits as they could vary quarter to quarter with the time and size of stock option exercises.  Instead, the Company will include the impacts with each reported period.  As a point of reference, the Company would have had of net income benefit in the second quarter of 2016 and would have had for the full-year 2016, resulting in an EPS benefit of in the second-quarter 2016 and for the full-year 2016.

The Company estimates its 2017 capital spending to be up to , compared to a prior guidance range between .

Certain forward-looking statements are included in this release.  They use such words as "expected," "reflects," "no fundamental change," "we are encouraged," "continue," "see," "increase," "remain," "may," "believe," "expects," "revising," "include," "estimates," and other similar terminology.  These statements reflect management's current expectations regarding future events and operating performance and speak only as of the date of this release.  There is no certainty that actual results will be achieved in-line with current expectations.  These forward-looking statements involve a number of risks and uncertainties.  The following are some of the factors that could cause our actual results to differ materially from those expressed in or underlying our forward-looking statements: customers' changing inventory requirements and manufacturing plans; customer decisions to move forward with our new products and product categories; average profitability, or mix, of the products we sell; dependence on third-party suppliers and partners; interruptions or weaknesses in our supply chain; increased raw material costs; fluctuations in currency exchange; and the ability to meet development milestones with key customers.  This list of important factors is not all inclusive.  For a description of certain additional factors that could cause the Company's future results to differ from those expressed in any such forward-looking statements, see Item 1A, entitled "Risk Factors," in the Company's Annual Report on Form 10-K for the years ended .

This press release and the preceding discussion of the Company's results, financial guidance, and the accompanying financial tables use the following financial measures that have not been calculated in accordance with U.S. generally accepted accounting principles (GAAP), and therefore are referred to as Non-GAAP financial measures:

Net sales at constant currency translates the current-period reported sales of subsidiaries whose functional currency is other than the U.S. dollar at the applicable foreign exchange rates in effect during the comparable prior-year period.  In calculating adjusted operating profit, adjusted operating profit margin, adjusted income tax expense, adjusted net income and adjusted diluted EPS, the Company excludes the impact of items that are not considered representative of ongoing operations.  Such items may include restructuring and related costs, certain asset impairments, other specifically-identified gains or losses, and discrete income tax items.  A reconciliation of these adjusted Non-GAAP measures to the comparable GAAP financial measures is included in the accompanying tables.

The following is a description of the items excluded from adjusted operating profit, adjusted income tax expense, adjusted net income, and adjusted diluted EPS for the three and six months presented in the accompanying tables:

deconsolidation – During the three and six months ended , due to its continued reduced access to U.S. Dollar settlement controlled by the Venezuelan government, the Company recorded a charge of related to the deconsolidation of its Venezuelan subsidiary, following its determination that it no longer met the GAAP criteria for control of that subsidiary.  Beginning with the three months ended , the Company's consolidated financial statements exclude the results of our Venezuelan subsidiary.

currency devaluation – During the six months ended , the Company recorded a charge of related to the devaluation of the Venezuelan Bolivar from the previously-prevailing official exchange rate of to USD to to USD.